‘Paint it green’ is Alien Rockin’ Explosion’s second album, a surprisingly ragtag record with nine songs dancing between raw punk and hard-power-progressive rock. The lyrics tell about their adjustment to planet Earth from a critic point of view but without losing the good mood and optimism always present in the quartet.

Produced by the band, the album was recorded between Bravo Estudios in Alcázar de San Juan and the alien’s headquarters. Mixing and mastering were done by Danny Luces (Bloodhunter bass player and live sound engineer of In Mute, Celtibeerian, Debler, Dünedain). The whole artwork (including animated video) was made by the great Leo Traverso (Canal Historia,  SnakeyeS,  Cherokee, Sexaine…),  graphic artist abducted by the aliens for this new era.

A step forward in the unique style of the foursome, with improved sound and a brand new image. Not to forget the appearance of Maschine Nitrox (from W.O.A’s Maschines Late Night Show) as special host. 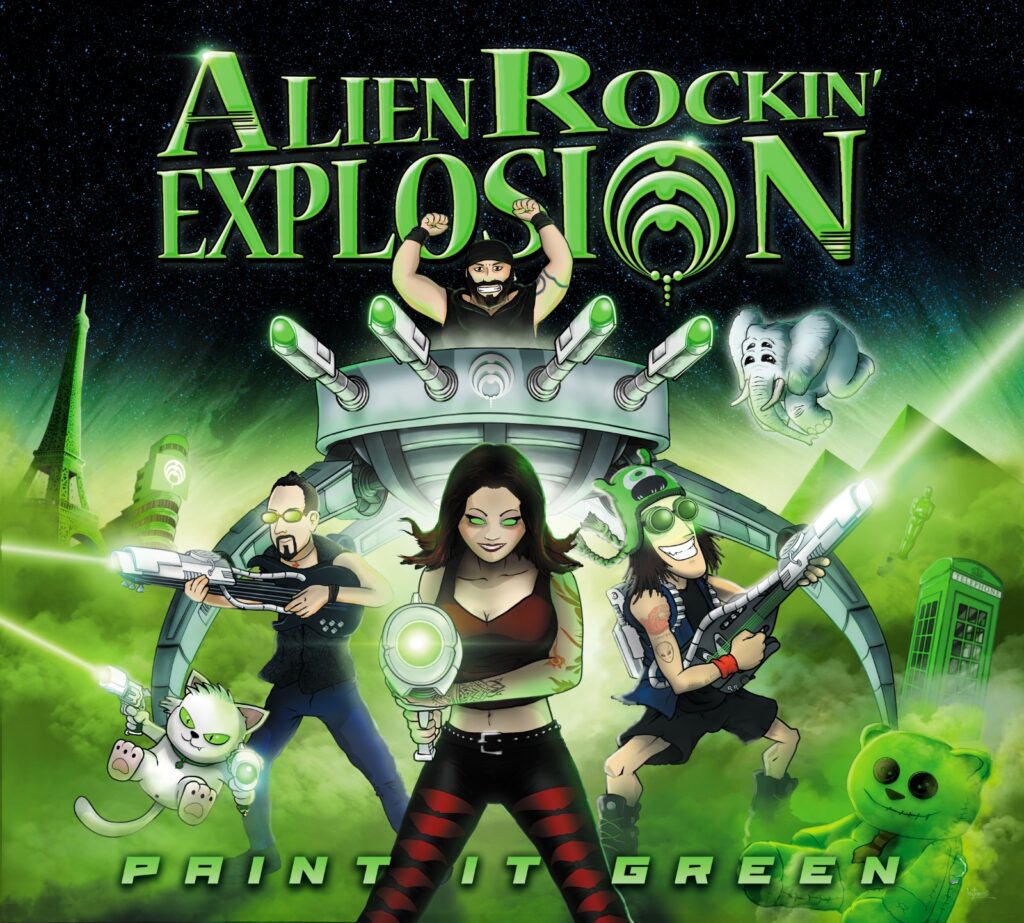 ‘We A.R.E here!!’ is the result of this interstellar journey and ALIEN ROCKIN’ EXPLOSION members’ adaptation to people and earthly customs. An amazing album where these curious visitors from Outer Space managed to put into practice everything learned from the Voyager tracks, giving birth to a strong opus with nine hard’n’heavy songs full of cheerful and optimistic character, a taste you can get from listening their singles “Taste of Rock’N’Roll” and “Once A Week”.

Production-wise, this first effort from ALIEN ROCKIN’ EXPLOSION’s, self-produced and recorded, has been mixed and mastered between October 2016 and January 2017 by Kike Hernández (Find Us Studios, Madrid, Spain). What is more, ‘We A.R.E here!!’ features Gema Vau on both vocal production and backing vocals, the guttural voice of Yeibid Yeah and Pablo Ruiz, from Spanish prog colossus Asfalto, on bass as earthling featurings. Artwork by “Rubén “Pocopelo” Bravo.

You can listen it in Youtube, Spotify, Google Play and Itunes.